The project was run by LEAP Sports who are based in Scotland and exist to tackle the barriers that prevent LGBTI people from accessing, participating and excelling in sport.  You can read more about the Pride House which LEAP delivered for the 2014 Commonwealth Games here too.  This time around, LEAP were joined by Unity Enterprise, a Scottish charity who work to promote the full cultural, social and economic community inclusion of individuals with disabilities and mental health problems.  Unity run the ‘Spoon Café’ in Glasgow which was completely rebranded as Pride House for the duration of the Homeless World Cup.

Pride House received the support of the Homeless World Cup organising committee and indeed were the only organisation whose street teams were invited on to the tournament grounds to talk to fans and players.

The Homeless World Cup is a huge event which embraces the power of sport in changing people's lives.  This event gives rise to an examination of issues such as homelessness, asylum, refuge and poverty - and given the disproportionate representation of these issues for minority groups, it was particularly necessary and poignant for a Pride House to exist during the Homeless World Cup.

The programme was a packed out affair, focusing on many issues relevant to LGBTI inclusion in sport, but also with extended opportunities to examine deeper issues such as homelessness, refuge and asylum.  The venue also played host to social, cultural and recreational events, events targeted at the LGBTI sporting community, and events for families.  The Scottish Government, UK Government and Glasgow City Council all supported the event with Lord Andrew Dunlop from the UK House of Lords, Kevin Stewart the Minister for Local Government and Housing, Archie Graham the Deputy Leader of Glasgow City Council, and Lord Provost Sadie Docherty all attending a special civic reception event.  Some of the speeches from this event can be viewed here.

The Homeless World Cup was only announced as taking part in Scotland in February 2016 following difficulties with the previously agreed host nation.  This meant that there wasn’t a great deal of time to make the event happen, and of course even less time for sports activists to mobilise on the ground in Glasgow to make Pride House a reality.  This also meant that much of the programme was run through fundraising and event sponsorship and the team of 21 volunteers were part of a community effort to bring in enough resource to make the project work.   The volunteer team undertook the following:

We saw around 1,200 people come into Pride House during the week it was open.  We saw an increase in public support, and an increase in athlete engagement with the event.  The feedback from those taking part in the project has been overwhelming.

Photographs from the event can be found here. 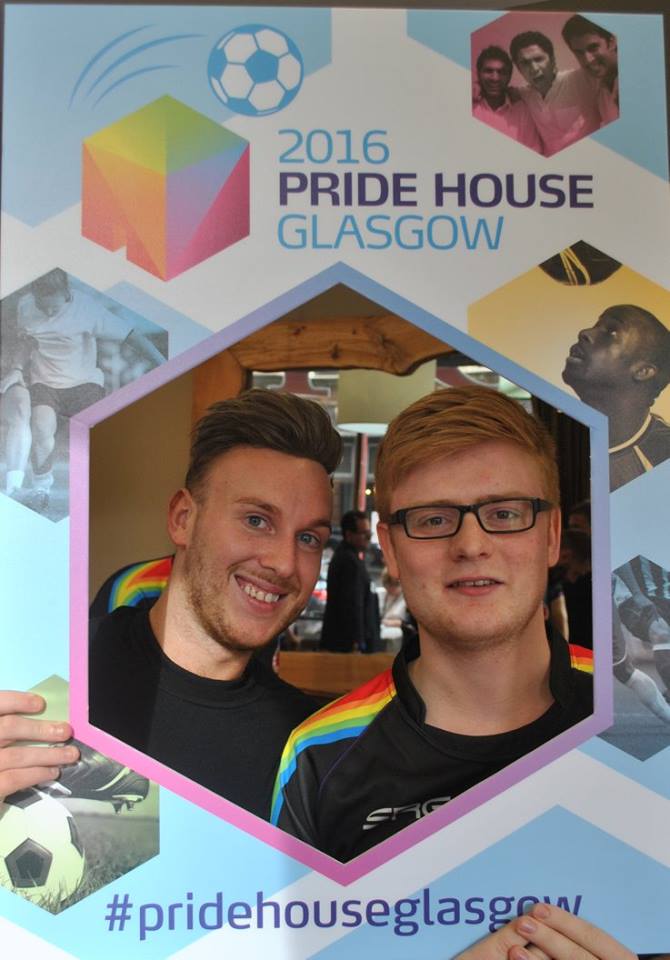