Their reach was limited to São Paulo, where they held a conference, an art exhibition, and a drag soccer game. The group also used social media to reach people in other parts of the country and internationally.

Your Shirt With Pride art exhibition

CDG Brasil collected images of people from diverse sexual orientations wearing soccer club shirts. They put together an exhibition of the images which was displayed at the entrance hall of the Matarazzo building, with some images projected on the facade. The exhibition coincided with the 18th LGBT Pride Parade in São Paulo.

The initiative was part of a campaign to combat homophobia in stadium, promoted by the Secretaria Municipal de Direitos Humanos e Cidadania (the Human Rights and Citizenship secretariat) in  São Paulo, in partnership with CDG Brasil and Pride House Brazil.

This street football match took place in the Barra neighborhood outside the Museum of Diversity. The event was designed to be fun and irreverent while promoting coexistence and a culture of peace.

This campaign encouraged people to take photographs of themselves in their soccer jerseys and post them to social media using the hashtag #PHBR. 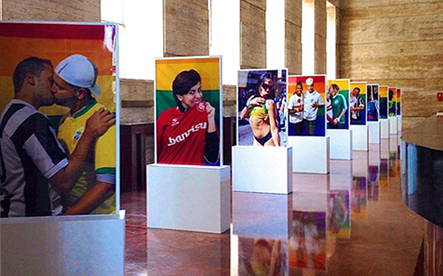