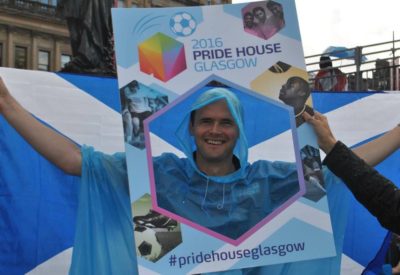 Pride House International wishes to extend warm congratulations to all the organisers, volunteers, and players who participated in this inspirational and successful tournament in Glasgow. George Square was the perfect showcase for the matches, and a suitable venue to host so much talent and heart from all over the world.

As many of you already know, several events took place at Pride House Glasgow 2016, a pop-up human rights and equality hub that ran in parallel to the tournament. Hosted in concert with the Unity Foundation and held at the Spoon Cafe at 47 Trongate, Pride House Glasgow 2016 welcomed athletes and spectators every day of the event. We were also invited to distribute information and engage in conversation in George Square, an honour for which we’d like to extend a special thanks to the organisers.

Like the Homeless World Cup, the Pride House movement strives to increase diversity and decrease discrimination in sport. In addition, our missions also dovetail given the overrepresentation of LGBTI people in homeless and disenfranchised populations around the world. We at Pride House International would like to thank the Homeless World Cup for their support of our presence in Glasgow, the first of their tournaments at which we’ve appeared. We very much look forward to future collaborations, in Norway in 2017 and beyond.